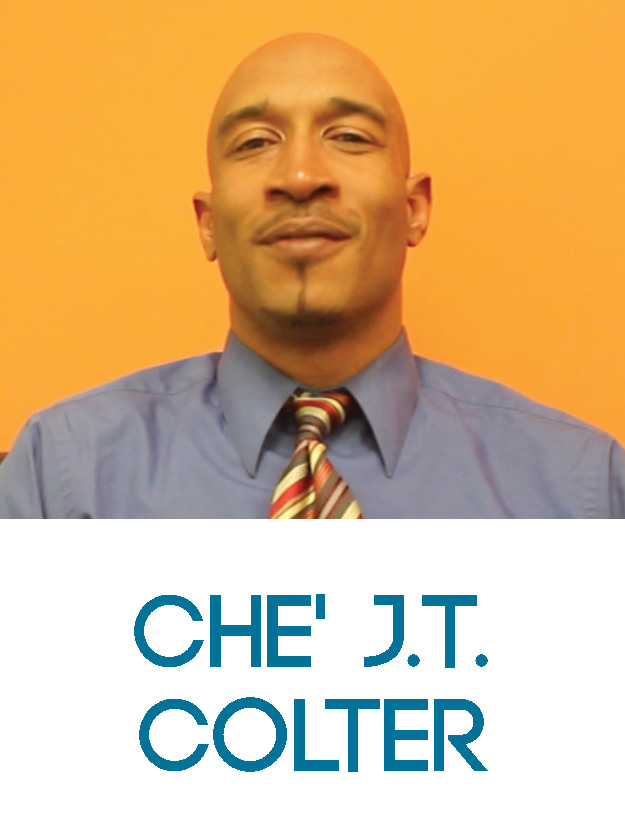 During the year of 1983 on November 17th a child was born into the Red, Black and Green lineage to Dean Colter Jr. of Harlem, New York and Hazel Wright of Newark, NJ, their prince was named Che` John Toussaint Colter.

After leaving Orange General Hospital this couple chose to raise Che` within the city of Newark, NJ enrolling him to attend St. Leos for kindergarten through 1st grade. Given that intellectual and cultural development for children was high on their list in raising their first child, they set sights on a new school for elementary.

Harriet Tubman Elementary School lead by Mrs. Ali and Mr. Hoover was the place where Che` J.T. Colter would develop in performing arts and public speaking. While growing up his entire life as member of Abyssinian Church and youth usher there, these experiences instilled a sense of value within Colter along with the countless weekend cultural trips when his father would take him to all of the historic sites through Harlem, USA and other areas of historical significance within New York City.

Next, with 5th grade approaching Che’s family moved to Glen Ridge and he continued his journey of helping the homeless veterans in downtown Newark, NJ and New York City.

When Che J.T. Colter arrived to this new town he excelled in sports to attain All-State honors in high school football and track and also lettering in baseball as a freshman. Throughout his experience within Glen Ridge his mother always reminded him of his duty to make a meaningful reinvestment back to the city of Newark.

After completing high school Che’ J.T. Colter attended Cheyney University of Pennsylvania and majored in Business Management with a minor in Hotel, Restaurant and Tourism Management. Furthermore, this gave Che’ at a young age the option to work with companies such as Pepsi Bottling Group, Hilton Hotels, MGM , Harrah and Four Seasons Hotels and Resorts while serving as the national charter membership director of The National Society of Minorities in Hospitality being twice elected by its membership delegates.

Having received the greatest gift from God Che’ became a father of Jayden Rooks-Colter and chose to leave the hospitality industry and work with America’s juvenile court population in Philadelphia, PA and Newark, NJ serving with both Vision Quest Corp, Youth Advocate Programs Inc and North Star Academy Charter School.