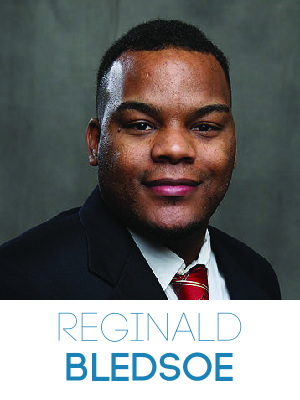 Born and raised in Newark, Reginald Bledsoe attended Public Schools and graduated from Newark Tech in 2009. Currently serving as a Legislative Aide to Newark Municipal Council Member Eddie Osborne, Reginald’s public service career began in 2010, when he was elected the youngest Democratic District Leader in District 5 of the Central Ward.

He had the pleasure of serving as a Legislative Aide to Former Freeholder President (now Assemblywoman) Blonnie R. Watson. He has served in a variety of public and private internships, including with the Newark Municipal Government and with the late United States Senator Frank Lautenberg.

In 2015, he was featured in Observer New Jersey’s List of 50 Powerful Young Black Democrats and in 2016 he was featured as one of New Jersey’s 30 Under 30: Political Up-and-Comers. He serves on the Board of Directors for United Community Corporation (UCC), Newark Pride and One Voice for LGBTQ Issues. He is the recipient of numerous community awards.

Reginald holds a B.S in Political Science from Montclair State University (MSU), where he was elected the First African American Student Trustee on MSU’s Board of Trustees.

As an elected school board member, I believe the most important responsibility is to understanding the budget and being a watchdog over taxpayer dollars. It is imperative that board members receive and review all material pertaining to the finances of the district prior to the school board meetings and to question any item that is not in the best interest of students and fiscally responsible. Specifically to avoid potential budget deficit, it is the board responsibility to ensure that the district has reserve funds for unexpected expenses. It is also imperative that board ensures that proposed budget is maintained.

I would like to see the revival of the Amistad Policy within the social studies curriculum within the Newark Public Schools. As a school board member, I would request an audit of all academic programs for example several of Newark's intervention programs like Read 180, System 3000 and iRead are being utilized, however student achievement is lacking so either they are not working or not being used to fidelity. In addition, I would like to see the expansion of early childhood education with the usage of more technology.

I support balance accountability and autonomy for the superintendent, principals, etc. but there needs to be monitoring by the school board to ensure fairness and equality amongst everyone.