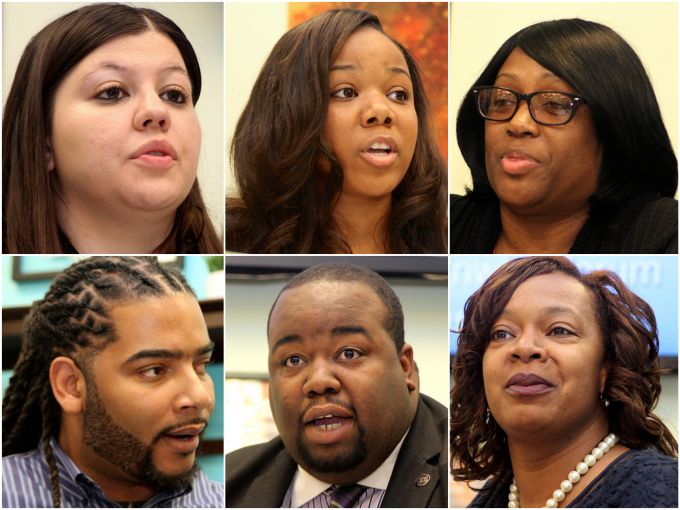 In attendance were independents Veronica Branch, Charles Love III, and Sheila Montague as well as Dashay Carter, Crystal Fonseca and incumbent Marques Aquil-Lewis, who make up the Ras Baraka-backed Children First slate. Fonseca ran unsuccessfully for the board as an independent in 2014.

To varying degrees, all candidates called for a return of local control as well as for a district-wide push for more community engagement on policy matters, but as the 90-minute-hour forum progressed, policy differences began to surface, particularly on the issue of school closure.

Fonseca and Carter, and to a lesser extent Lewis, kept their responses centered around ending school closures and conducting district-wide needs assessments for those schools possibly facing closure. Lewis called for Newark to partner with other districts to use the courts to battle the state. School closures, he implied, are symptomatic of state-level policies.

“You have to understand the condition of a school,” Lewis said. “What did it go through? Have the schools received numerous principals? Has staff turned over? We have schools robbed of guidance counselors and social workers. That’s like treating a cancer patient without chemo. Why should a community fail when a school doesn’t get the resources?”

Conversely, Love called to shutter chronically failing schools: “Some of our schools have been failing forever. Shut them down.”

Montague called for a stop to OneNewark, the district’s universal enrollment initiative that has led to the closure or consolidation of some neighborhood schools, but qualified that the ideas behind the plan weren’t the problem, but rather the implementation. “We need reform,” she said, “but I can never imagine saying that we should close the schools."

Branch said the challenges facing Newark were more national than local, and added that engaging communities would bring ownership back to district-level policy decision making:

“We need to engage the community. Once we do that we can reach out to broader issue to fix our problems,” she said.

Fonseca echoed Lewis, calling for an assessment of a school’s needs before closure.

“Closing schools is not an answer to me. There is obviously a problem with the leadership in the schools and the children have been victims of that. But shutting down the school is not an option to me. The state is telling us ‘I don’t care and let’s give that money to a charter’.”

Issues surrounding social and racial inequity dominated this question. Montague touched on Abbott v. Burke, arguing that it had failed to adequately provide fair public education in the underserved communities it targeted. She added that with the budget in local control, the district would be able to better manage budgetary waste.

Pointing to fundamental societal racism as a cause of schools closing in “black and brown neighborhoods,” Lewis said he supports local control as a means of creating alliances with districts statewide in pushing back policies handed down from the state.

Fonseca agreed, although added that the issue of local control should not be rooted in negativity toward state policy. She said she would rather focus on bringing the district “into the 21st century” with textbooks and computers.

Carter further emphasized community engagement, saying local control informs the democratic process where “all board members are elected by the community.”

Montague said local control should involve the mayor, citing Mayor Ras Baraka’s role as a former principal of Central High School. She also said local control would elevate the involvement of the community and all local stakeholders.

Love said the signature issues surrounding local control would mean that the city’s elected school board would choose the next superintendent:

“Local control should be about the people,” Love said.

“The Newark community needs to be honest about where it is right now,” Lewis said. “We have teachers who don’t respect their jobs and they need to be more concerned about educating our children and have to understand their positions as role models.”

Fonseca continued her call to inject the schools with necessary resources.

“We’re giving kids outdated textbooks,” Fonseca said. “How are they supposed to learn? Some of the books are falling apart.”

Carter called for a curriculum that encourages critical thinking, as well as providing students skills in IT and coding.

“Realistically, not everyone will go to college, so we need to help teachers with modern day curricula and technology,” she said.

Branch said a student’s aptitude should not be gauged by tests and supports a student's right to opt out of standardized testing.

“I don’t believe in high-stakes testing that was not designed by educators,” she said.

Fonseca agreed, saying parents should opt out of PARCC.

“As a student, I wasn’t a good test taker,” Fonseca said. “That doesn’t determine a level of intelligence. It makes no sense to me.”

Carter continued the theme, but said she didn’t so much disagree with testing, but expressed concern for the district’s ability to administer tests.

“Our children aren't ready for PARCC,” Carter said. “Our text books aren't aligned with Common Core, but PARCC is. We need to give young people other options.”

Montague said she believed in the ideal of testing, but that the district should not consider test results in evaluating teacher efficacy.

“I don’t think tests should be used to get rid of teachers,” she said, adding that opting out is a stance for the community’s civil rights.

“Once we allow those small things to happen, there’s no stop,” Montague said. “Corporations manipulated the system and placed a stronger hold on our young black men to establish a pipeline to prison.”

Candidates Ronnie Eugene Kellum, who ran unsuccessfully for a seat on the board in 2014, and Natasha Alvarado did not attend the forum.