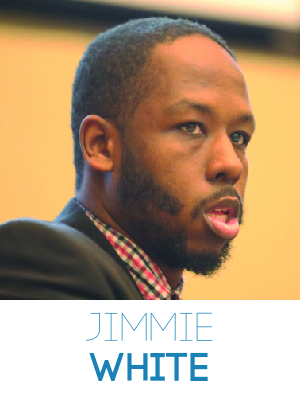 Twenty seven year old Jimmie White is a community advocate and business owner of Newark’s I.M.P.A.C.T (Initial Major Progressive Articles Creating Tranquility) LLC, whose mission is to showcase, spread and create positive and progressive news to better Newark, New Jersey and other communities through programs, events, and job creation.He is a philanthropist, website designer, community and event organizer, who wants the best for his community.

A product of Newark Public Schools, Jimmie White graduated from Miller St. Academy elementary and Malcolm X Shabazz High School, where he was in the top 10 percent of his class. During his sophomore year, after being jumped by members of a gang, Jimmie knew something had to be done to solve the many issues of violence and poverty.

During the summer of 2008 at the age of 19, Jimmie signed-up to become a member of People’s Organization for Progress (POP) – an organization with the goal of eliminating social, racial, and economic injustice. It is under the tutelage of this organization where Jimmie learned about African American history, community organizing, civic education, and the origins of poverty.

He regularly attends Newark City Council meetings and speaks about the concerns of citizens and local resident. Jimmie White is running to end the racism that continues to plague Newark Public Schools in the form of privatization and bad practices. For generations, urban communities across the United States including Newark, NJ have endured these and many more inadequate practices including overcrowded classrooms, corroded facilities, financial mismanagement, and insufficient African studies

Jimmie served on the Board of Trustees of the International Youth Organization (IYO) and as Chairman of their Alumni and Friends Association until 2013. He is currently a member of People’s Organization for Progress (POP) and serves on the executive team of FP YouthOutCry Foundation as Director of Education.

Jimmie has been employed by UPS (United Parcel Service) for the past eight years and Home Depot for two years. His next move is to develop Newark’s I.M.P.A.C.T program to become the leading media company that best represents Newarkers to the world. Jimmie White also participates in demonstrations with various organizations throughout New Jersey. One of his greatest joys in 2012 was assisting New Jersey’s working families to help raise the state’s minimum wage. Also in 2012, Jimmie White was elected Chairman of the Newark Chapter of People’s Organization for Progress.