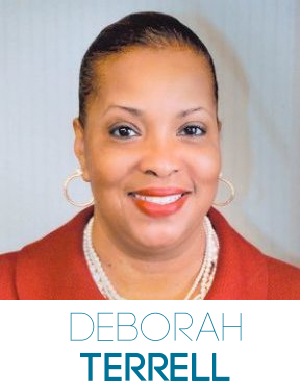 Dr. Deborah Terrell’s commitment to education began in Newark, NJ as a “down neck” student who attended Hawkins Street School and East Side High School. She received her Bachelor’s Degree from Rutgers University and a Master’s Degree from Montclair State University. An Honorary Doctorate of Humane Letters was awarded to Dr. Terrell by Essex County College in May 2013.

Dr. Terrell’s mission for students has always been to become productive and responsible citizens. She implemented best practices that would promote a culture of learning, develop character, embrace history and foster a strong sense of family and community.

Dr. Terrell’s ability to plan, prioritize and practice, exemplifies why she remains the only school administrator in the district to become the recipient of the National Blue Ribbon School of Excellence Award in both of her respective positions. Her proven record as an educational leader continued as NPS Regional Superintendent of East Ward and Central Ward schools. During the 2011 tumultuous introduction of “educational reform,” Dr. Terrell was appointed interim superintendent.

As a retiree, Dr. Terrell continues to pursue her commitment to education. She served as education coordinator for the North Ward Center, as well as the associate director of College Readiness Programs at Essex County College. She is president of the National Organization of African-American Administrators and Board of Trustees secretary of It Takes a Village, Inc. Throughout her career, Dr. Terrell’s dynamic leadership has been recognized with numerous local, state and national awards.

Dr. Terrell is the loving mother of two sons and one grandson. Deborah believes that we all should DANCE to reach our goals: Dare to believe, Always do your best, Never get discouraged, Communicate, Expectations!