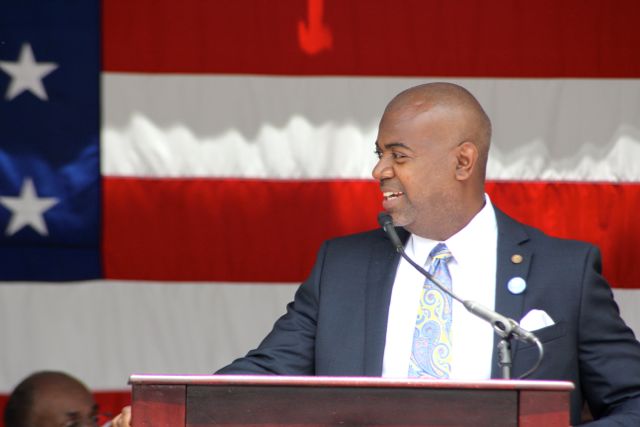 The Newark Trust formally installed Newark Mayor Ras J. Baraka to its Board of Trustees this month, filling a position specifically reserved for the mayor of Newark.

Baraka, along with NPS Advisory Board President Rashon K. Hasan, serve in an ex- officio capacity, filling the seats reserved for the mayor and school advisory board president. Baraka named Dr. Lauren Wells, the mayor's education advisor, as his official board designee. Dr. Wells was in attendance at the Trust's September 24 board meeting.

"Over time and through changing education and political landscapes, the Newark Trust for Education's mission remains constant and our work consistent with our core values. Our sole focus is to ensure that all Newark's young people have access to a quality public education," said Newark Trust President and CEO Ross Danis.

"Mayor Baraka understands this crucial role, and has signaled his support for the same results that we all want for all of our children: A future of unlimited possibility" Danis added.

Baraka, a former South Ward Councilman, took office in July. As a former principal at Newark's Central High School, improving the city's public schools in the state-run district was central to his campaign.

Ras Baraka is the son of renowned poets Amina Baraka and former Poet Laureate of New Jersey Amiri Baraka and the father of three daughters. A published author, his latest work Black Girls Learn Love Hard is dedicated to the life of his late sister, Shani Baraka.

Baraka was educated in the Newark Public Schools and went on to receive a BA in Political Science from Howard University in Washington, DC and an MA in Education Supervision from St. Peter's University in Jersey City. In 2007, Baraka began his stint as principal of Central High School. As a South Ward councilman, Baraka is known for advancing political equality, tackling issues affecting the current and future quality of life for Newark residents, including employment, public health and safety, development, and civic engagement.

Some of his key accomplishments include: Legislation recognizing violence as a public health issue; the Homestead/Abandoned Properties ordinance; an ordinance requiring early closures for retail stores and restaurants to curb loitering; the reopening of the South Ward police substation; and helping to create the Bergen Lyons Clinton Special Improvement District was created.

Baraka has also supported initiatives geared towards youth development such as South Ward READS and the South Ward Youth Development Center and he created the Senior Citizen's Committee, a group of committed residents addressing issues for seniors.