On April 24, the Newark Trust's Committee of Advocates welcomed Rashon K. Hasan, chair of the Newark Public Schools Advisory Board, and board member DeNiqua Matias to report on an assessment of district progress.

Trust President and CEO Ross Danis said the goal of the presentation is to create a dialogue about the assessment's findings and its implications.

“Serving as a member of a school board is often a thankless task.  The care and the time that went into preparing this assessment of district progress is commendable.” Danis said. “These findings provide a starting point for a larger community conversation about our children and their future.” 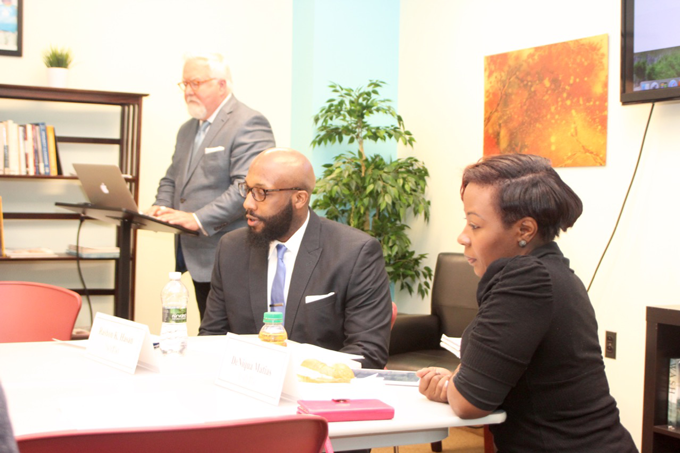 Rashon K. Hasan, chair of the Newark Public Schools Advisory Board, and board member DeNiqua Matias report on an assessment of NPS progress during a presentation to the Newark Trust's Committee of Advocates.

As the idea of a return to local governance becomes a more realistic proposition for Newark Public Schools, Hasan said the focus has been on examining the district's performance as related to the Quality Single Accountability Continuum (QSAC), which is the Department of Education’s monitoring and evaluation system for public school districts.

Among the areas of concern, said Hasan and Matias, are ensuring the district has up-to-date textbooks, comprehensive special needs services, as well as addressing the financial and instructional issues related to the Employees without Placement Sites.

“We have concerns as a Board about this. Some people say it’s a rubber room, but that’s not the case,” Hasan said. “People who fall in this category work in the schools but they don’t have permanent placement. If the principal does not hire them, they will be paid out of the central office budget.  The goal of not wanting forced placement is good, but it puts a burden on the central office budget.”

Dr. Lauren Wells, Chief Education Officer for the administration of Newark Mayor Ras Baraka, asked about who the district was hiring to fill building vacancies.

Each year, Hasan said, the district has had cost overruns of employees without placement.

“We recommend that EWPS (Employees Without Placement Sites) pool is used to fill existing teacher vacancies and that we release those members if their qualifications or credentials do not meet expected performance standards,” Hasan said.

Another key area of concern, according to the report, are lessons learned from OneNewark, the district's universal enrollment initiative. Hasan said that while OneNewark shows policymakers where parents are choosing to send their children, it never gauged the reasons.

“Universal enrollment showed us immediately where parents were sending their kids, but we didn’t have qualitative information as to why,” he said. “If I lived around the corner from Brick-Avon and didn’t want to go there, then why? Was it security? Was it a lack extracurricular activities? What is it that drives these decisions?”

Ray Ocasio, executive director of La Casa de Don Pedro and a Newark Trust board member, followed up on Universal Enrollment and OneNewark, asking how effective the initiative can be in the long term before entire neighborhoods are devoid of public school children.

“How do you stop the drain?” he asked.

Hasan responded that increased oversight and additional data gathering around the initiative can help the Advisory Board collect insight to make recommendations to change district policy.

"There’s an opportunity," Hasan said, "to use new information to provide insight about these neighborhoods and schools."

Ocasio also noted that expansion of charter schools should be made at the local level, not at the state level. “Then, they can serve their intended purpose of being an experimental lab,” he said.

DeNiqua agreed, saying that the district needs to do a better job marketing its traditional public schools.

“We’re not marketing our traditional schools, but you see charters marketed everywhere,” she said.

Hasan continued: “We don’t have a product, but we have a service that needs to be better marketed. No student should step into a school building and be behind the eight ball.”