The bios were submitted to the Newark Trust for Education for it's annual candidates' forum on April 14 by the candidates or taken from ballotopedia.org. They were edited for grammar and consistency, but not for content. They are in alphabetical order. 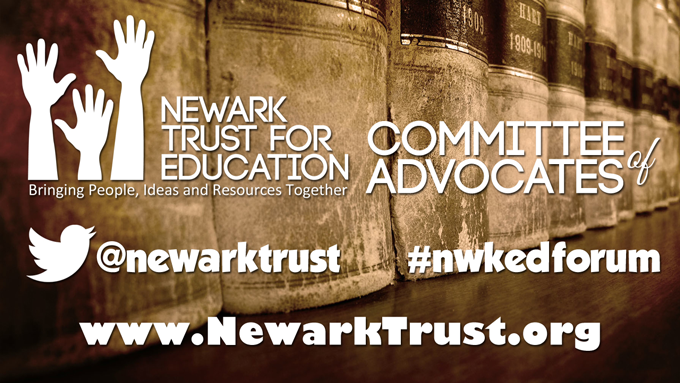 Natasha Alvarado has strived to remain an active participant in her community. Born, raised and educated in the city of Newark she now is seeking a role serving the Newark Board of Education. She, herself recalls the experiences of her education in the Newark Public Schools from grades K-12th at Abington Avenue School, First Avenue School, and Technology High School .

These educational settings have motivated her to become involved in school organizations and community based organizations too. She participated in Newark’s All Stars Project Inc., is a current board member of Aspira Inc. of New Jersey, a former Peer Leader for Newark Girl Scouts of America and former participant of The Newark Youth Connection. She is a graduate of Montclair State University and is currently working on her master’s degree as well.

Ms. Alvarado believes that education is of high priority. Throughout the week, she works at Montclair State University in the Department of the Bursar. She caters to the needs of students in regards to financial aid eligibility, student bills, and addresses the needs of the Veteran population on campus. On Saturday mornings, she is tutoring Newark high school students who aspire to attend college through NJIT’s Upward Bound program. Natasha is a dedicated, compassionate detail- oriented individual that aspires to see Newark live up to its full potential.

Veronica Branch is a lifelong Newark resident, a mother of three beautiful children, two currently enrolled in Newark Public School and one a graduate of Newark Tech.

Ms. Branch is an advocate for education and children rights.

Dashay Carter is running on the "Children First Team." She was born in Newark and graduated form North Star Academy. She went on to earn a bachelor's degree in sociology with a concentration in education from Emory University.

Since 2012, she has served as an aviation operation specialist in the U.S. Army Reserve Branch. She is a member of St. James AME Church and is involved with the Big Brother Big Sister program of Essex and Hudson County. Source.

Crystal C. Fonseca is running on the “Children First Team.”

Ms. Fonseca earned a bachelor’s degree in political science with a minor in sociology from Saint Peter’s College. She is pursing a master’s degree in urban affairs at Rutgers University. She is employed in the community relations and outreach department of the Jersey City Incinerator Authority

Ronnie E. Kellam is a resident of the North Ward. He graduated from Malcolm X. Shabazz High School. Mr. Kellam is a firm believer that education is the key to open up countless doors for both young and old alike.

Mr. Kellam has been apart of award winning debate teams, has held class president for his four year at Malcolm X. Shabazz High School and represented his school by being the only one that students looked upon to get things done.

Marques Aquil Lewis is running on the “Children First Team.” A native Newarker who attended The Newark Public Schools and graduated from Arts High School, Mr. Lewis remains connected to the schools and community agencies that nurtured him as a adolescent.
His personal objective is to be an advocate for young people and initiate the kind of dialogue that will bring young people and adults together. He is founder of the Da Youth Organization in Newark, executive minister of New Light Missionary Baptist Church in Newark, , minister of public relations for his church, and a community activist.
Mr. Lewis has received a Community Service award from United Youth Council, Youth Ambassador of Newark from the City of Newark, Outstanding Community Service Award from Councilman At Large Luis Quintana, and Certificate of Accomplishment by the Abbott Leadership Institute.
Mr. Lewis is the youngest elected member on the school district’s Advisory Board, a member of the West Ward Collective, West Ward Clergy Alliance, a member of Quitman Street School PTA, and alumni of the City of Newark’s Youth Connection. Source.

Charles Love is a native and life-long resident of Newark. He grew up in Newark’s Central Ward on Muhammad Ali Avenue and on Gold Smith Avenue in the city’s South Ward, where he was raised by his parents and great-grandmother.

Mr. Love attended Louise A. Spencer, Queen of Angels, Cleveland Street, Malcolm X. Shabazz, Central and West Side Night Schools. Like most of his peers, Mr. Love hung out, got into trouble and directly witnessed how drugs, gangs and gun violence destroyed his community. Fortunately, organizations like the International Youth Organization (I.Y.O) taught him leadership skills, teamwork and the value of activism.

Mr. Love became a father at the age of 23 and decided to get serious about his future and that of his son. He became a community outreach specialist with the AmeriCorps Vista Program and Habitat for Humanity; building and renovating houses for low-income families and strengthening communities throughout the Northeast. He became a youth coordinator for Babyland Family Services, working with hundreds of children and families in Newark, and later mentoring at-risk youth and providing supportive housing to the homeless with both the FP Youth Outcry Foundation and Turning Point Community Services respectively.

But Mr. Love’s passion and family legacy has always been in education. In 1999, he became a special education paraprofessional assisting lead teachers with instructing over 200 of our “most restrictive” children, classified with cognitive impairment, behavioral disabilities and Individual Educational Plans (IEP) within the Newark Public Schools. He went on to become a full-time Newark Public Schools Substitute Teacher at Chancellor Avenue, West Side HS, Thirteenth Avenue, Newark Vocational and Central High School. Some of the best days of his career were spent working with educational leaders like Principal, Ras J. Baraka, Liza Woodard and Ms. Millie Harris. Mr. Love offers a unique perspective as an educator, former NPS student and parent as it relates to improving student achievement.

Mr. Love has always been an advocate for educational equity and has often been described as radical, conscious and passionate. It’s no surprise, as he comes from a long line of community activists and educators.

Mr. Love has been able to serve the most difficult of students because he was once one of them. With a burning desire to defy the odds, Mr. Love returned to school earning his master of arts degree in human services from Lincoln University in Philadelphia, PA. While studying at Lincoln, Mr. Love researched and investigated issues affecting public policy throughout the country. His thesis entitled “Operation Special Ed: An Examination into the Resource Allocation for Non-White Special Needs High School Students in Newark, New Jersey” has been referenced by educators and human service professionals.

Mr. Love is currently a volunteer research assistant at Rutgers University-Newark, Newark Schools Research Collaborative and member of the Newark Violence Reduction Initiative. He is committed to life-long learning and on-going professional development. He is a second year doctoral student studying human and organizational development with a specialty in educational leadership at Fielding Graduate University.

Mr. Love’s personal experience, professional career and academic studies have equipped him with a deep understanding of education, governance, policy, and finance.

Mr. Love is an activist, advocate, parent, educator, and with your help, our next Newark Public Schools Advisory Board Member.

Sheila Montague is currently a professor at Essex County College, and also a veteran teacher of 20 years. She has experience working with Newark Public School students on an elementary level as well as high school, with numerous local and national honors, which include The National Honor Roll of Outstanding American Teachers.

Ms. Montague’s teaching experience includes a decorated record as a debate coach that encompasses a decade of successful debate tournaments and countless awards, have opened the door to not only students interested in national topics, but has also led to advancement in higher education to many urban students.

In 2009-2010, Ms. Montague was the first place winner in an Elementary School City-wide Film Festival Award for best Middle School film/documentary on the topic of how growing up in an urban district without a dad effected several student’s.

Additional achievements include many awards in the area of athletics, specifically girls basketball coaching. Hard work and dedication has aided Ms. Montague in the achievement of not one, but two city-wide championships. Basketball was also used as an effective vehicle to drive more urban students to higher levels of education. Inclusive of several students achieving full scholarships to schools such as Seton Hall University.

As a published author of poetry and founder of CTLT (Changing The Lens Together) Foundation and founder of Face Structure, which hosted The First Teen Hip Hop Competition 2010, where teens all across the city performed original pieces grounded in historical messages and political issues.

Ms. Montague has a passion for community outreach and aside from growing her own, supports many community driven meetings and events, inclusive of collaborating with neighborhood churches and other community organizations who also share the same common goals of community uplift. Sheila is also an active member of (PULSE) Parents United for Local School Education.