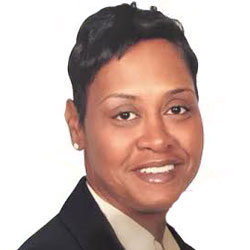 Jody Pittman has been a life-long member of the Newark community and the mother of two (2) children in the Newark Public Schools (NPS) district.  Educated in the Newark Public School system, Jody began her career at NPS in 1998.  During her seventeen (17) plus year tenure she was the first employee in the history of the Newark Public Schools to be named Employee of Month, for her hard work and dedication to students in the city.  In 2003, when political forces in the city moved to relieve Superintendent, Marion A. Bolden, of her duties, Jody again rallied employees, parents and students to fight and keep what she believed was a Superintendent, who cared for the children.  Leading trips to the Department of Education, a letter campaign, and the historical march to Newark City Hall, Marion A. Bolden was reappointed as Superintendent until her retirement in July 2008.

Jody Pittman, while being a mother of two students in the public school system, continues to use her voice to promote and uplift any cause for the betterment of children throughout the city of Newark.  As a steadfast advocate for her community, students and parents, Jody believes the ultimate goal should be an equal and quality education for each and every Scholar in the city.  Refusing to push political agendas, Jody is a legitimate activist, and it is without question that the next stage would be for her to serve as a Newark Public Schools Advisory Board member.


Based on your qualifications and experience, what makes you a suitable candidate to serve on the Newark Public Schools Advisory Board ?

What are your reasons for running?

I am running for school board because I am a Mother in this community, where we lost 105 youthful and worthy souls and I am sure that the failed education system is a direct cause for the violence and death in my community; because, I unfortunately realized while working for an organization, which said they were here to advocate for children and parents, that many of the organizations, politicians and education leaders are not fighting for children, but power and money; because people make money of the failure of children in my community; and I meet children who are smart, inquisitive and truly wanting a solid education and I want to fight to secure they get it.

Are you running with an organizational slate? If so, please provide information about your platform.

What are your priorities for the district in the coming year?

My greatest priority is for the immediate sharing of best practices of high performing schools throughout the city with schools that are struggling academically; and pushing the district to implement true programming to help parents and children struggling economically and socially in order to ensure a home environment that is conducive for success via the very successful model of Parent Universities.

What attributes and qualifications do you consider essential for effective school board members?

The attributes and qualifications most essential for an effective school board member is the ability to independently think and make decisions, which are not aligned with a political agenda; the ability to critically think and comprehend the district’s budget and its complexities; a real understanding of Newark Public Schools and how the district functions; and honestly, board members should have a degree of formal education above high school.